R Gopalakrishnan studied physics at Kolkata, engineering at IIT Kharagpur and attended the Advanced Management Program at Harvard Business School. He has been a professional manager from 1967. He has served as Chairman of Unilever Arabia, as MD of Brooke Bond Lipton and Vice Chairman of Hindustan Lever, as Director of Tata Sons and several Tata companies. He also serves as an independent director of Castrol India and Hemas Holdings PLC, Sri Lanka.

He is actively engaged in both instructional and inspirational speaking. He has also authored eight books. 51 years of Management experience. 31 years of Board experience. Over 100 keynotes in India and Abroad. He has authored books, Contributed Newspaper Articles, Management Writer. R Gopalakrishnan (Gopal to his friends) spends his time in Writing, Advising, Speaking and Teaching.

Gopal has been a corporate leader for several decades: 31 years in Unilever and 19 years in Tata. He served in Jeddah as Chairman of Unilever Arabia, in Bangalore as Managing Director of Brooke Bond Lipton and Vice Chairman of Hindustan Lever, and as Executive Director of Tata Sons. Apart from serving as a Director on the TATA parent board, Tata Sons, and he also served several group companies. He also serves as an independent director of Castrol India and Hemas Holdings PLC, Sri Lanka.

He is a past president of the All India Management Association. Gopal serves as Executive in Residence at the SP Jain Institute of Management & Research, Mumbai. He is Distinguished Professor of IIT Kharagpur. 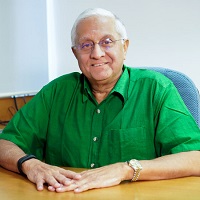